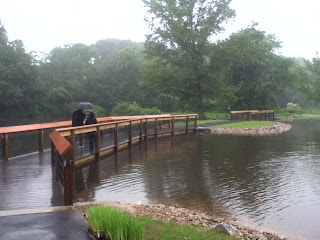 The new Tide Gates will soon be fully operational but water is now flowing thru open gates.  From these pictures, one can see the new water level at high tide and how the path work and regrading still allow for good access to enjoy and use the Duck Pond as neighbors and visitors have for more than 100 years!

Don Strait, executive director for the CFE/Save the Sound, spoke as his group led the project which included replacing the old tide gates and additional mitigation efforts at the Duck Pond to preserve access and enjoyment with the new tidal effect from the new tide gate configuration.  While allowing more tidal flow into the West River from the Long Island Sound the ecological benefits outweighed any inconvenience, however the regrading and boardwalk installation along the Duck Pond were necessary and appreciated efforts which mitigated most impediments to continued access and enjoyment of the Duck Pond feature within Edgewood Park. 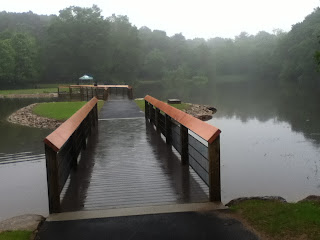 Attempting to fill FOEP president Semi Semi-Dikoko's shoes (absent due to illness), I closed the press conference part of the day's celebration by thanking - on behalf of the Friends of Edgewood Park  - all the partners involved, especially the team from CFE/Save the Sound for listening to and communicating with the Edgewood Park neighbors and friends throughout the project. 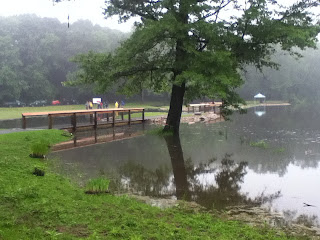 Greg Dildine
Baltimore, MD
I'm currently helping in the civic volunteer role I enjoy - as past-president on the 2017 Stoneleigh Community Association Board of Governors. I'm also the Treasurer for the Stoneleigh Elementary PTA. Previously, I was honored to be the Alderman(D) for New Haven, CT's 25th Ward, 2010/2011. I live in Baltimore, MD with my wife, Laura, and our two children.